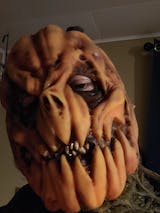 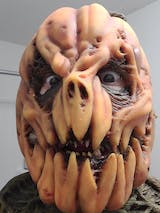 I purchased these teeth to complete a costume for a science fiction and fantasy carnival parade. Initially, it took a little bit of practice to get the mold and teeth to adhere properly. The great thing is that you can try over and over again until it is comfortable and fitted evenly. Aesthetically, they completed the costume perfectly. I had plenty of rave reviews along the route.

I did find casual speaking to be fine as can be expect with a mouth prosthetic. However, during the parade i have to should and that would unset them. I found that i had no trouble smoking a cigar and drinking beer out of a can while they were in. Jello shots on the other hand were a bit difficult but manageable with some practice. The parade itself was a 2 1/2 mile, 3 hour long procession that included drinking, smoking, yelling and all around revelry. At the end the bottom piece was completely intact and ready to be used again. However, although the top piece stayed in my mouth the entire parade, it was beginning to fall apart and did so completely upon removal. That is ok. I can still use them again after i reform the mold!

I doubt that most people would put their teeth through as much abuse as I did. I cant believe they held up as well as they did. I couldn't be more happier with their performance. 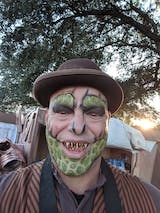 I'm very happy with the speed of delivery and quality of product. It fits way better than most of the other teeth do. It's an excellent product.

Quality product and was shipped quickly. Cant wait until Halloween!! Thank you!!

The teeth look really great They arrived quickly in the mail. Can’t wait to use them for Halloween

Ordered the morlock teeth for a large budget, horror film being shot here in Connecticut. Normally I make my own dentures for films I work on, but due to time constraints we needed teeth fast. Not only did they arrive quickly, packed well. They enclosed some fun goodies, a rubber bug, a cloth bag for the dentures and a mostly dead little sticky note pad. The teeth themselves are quality made, flexible and not easy to snap like other ones out there. I will recommend you guys for other films in the future, and will thank you in the credits. Thanks again guys!!!