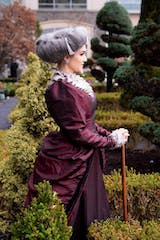 K
Kathie J.
My witch chin and nose were the hit of the party.