Lucius double vampire fangs have that little something extra to get your point across. Movie quality veneer costume teeth. Includes upper and lower piece. Great Quality, easy to use and maintain! 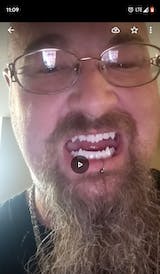 I ordered the Grell set and the Lucius set. Both had slight cosmetic distortions (thin gums around base of teeth, tiny air bubble trapped inside the teeth themselves) but I'm sure I'm the only one who's gonna notice them. Not enough of a concern to make me want replacements. Both pairs had a thin film on the teeth bits, but gentle scrubbing took care of that easily.

The Grell set are bulky and bold, which is great for a certain look, but these ones are smaller and a lot more subtle than I expected. At first I felt a little bucktoothed because of how the front teeth are shaped until I realized that it's designed more after actual vampire bats instead of the typical movie vampire with the flat bottomed front teeth. They go almost fully around my real teeth and I can grin without any of my actual teeth showing on the sides.

I ordered extra fitting pellets as well, and I'm glad I did. I think one of my included bags was mistakenly half filled because the extra pellets I ordered had more in them than the default included ones. It took some finagling to get it all set up but I feel my patience and time paid off. I wore my Grell pair to work yesterday and my boss and I had a lot of laughs about it.

I'm satisfied overall with my purchase and will definitely be recommending Mostly Dead to my friends that have similar interests as I do. 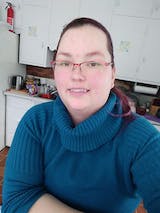 Thank you so much I am in love with my new vampire teeth and such a speedy service and delivery.

It got here quickly and looks just as good as the photos suggest.

very excited to get to playing with these lovelies! shape and colour is perfect and fit is moldable. A bit of prep t wear but well worth it.